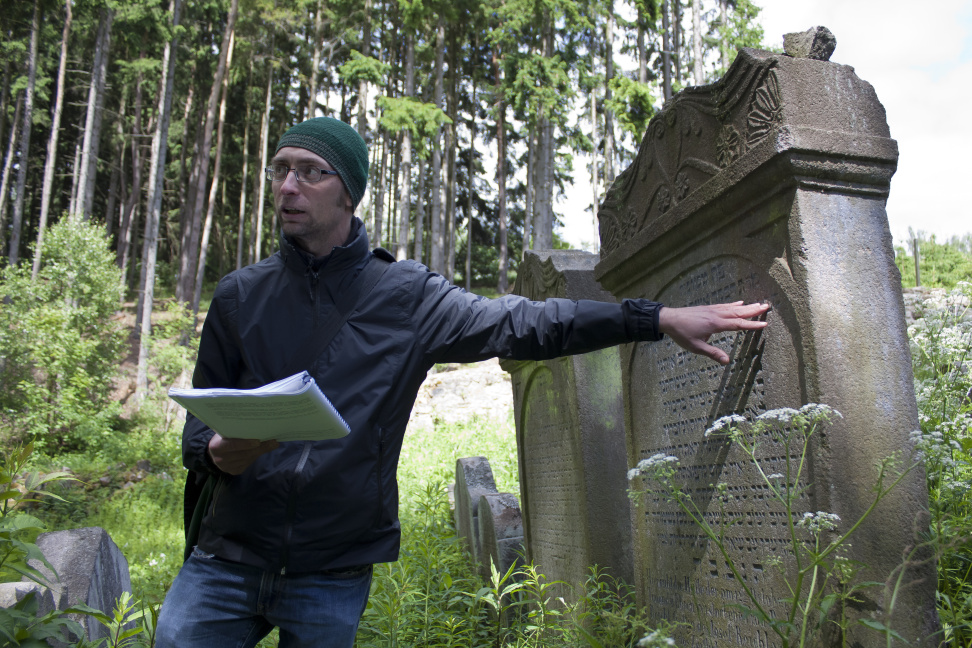 SYMBOLS on the tombstones

“Each symbol has a hidden meaning and can give us interesting information about the deceased,” explains Lukas Svoboda, historian from Museum in Karlsbad (pictuded above by Noe Schoralek at cemetary in Uboci / Amonsgrün).

The first group of symbols: symbols corresponding to the synagogue function of the deceased, his position and the work that he was in the liturgical life of the Jewish community.Hand symbol and the symbol of a can with a bowl described below.
“A circumcision guy” has motifs of circumcision knife on his gravestone. (Circumcision signifies fulfillment of the contract with God.)
Testament scrolls, books, book shelves, pen, pen-knife, candlestick – it mark Torah copyist.
A long kosher knife (less than a circumcision one) – a Jewish butcher has it; he slaughtered animals in the prescribed manner and followed the ritual.
Moneybox indicates an administrator of charity coffers.
The second group of symbols: Symbols with deeper biblical themes (trees, candles, pillars, floral motifs, crowns and some figures).Tree symbolizes Torah and wisdom contained in it, or it is the symbol of a righteous life.
A palm is related to a virtuous life.
A willow is a generic symbol for death of a loved one.
Plant motifs (flower, sprout) express hope for the future while the transience of human existence.
Fruits (pine cones, grape, and pomegranate) are symbols of love – to a partner as well as to the Law.
Candles and candle symbolize life and its laws.
The crown is a sign of wisdom, a deep knowledge of the Torah or the reminder of merit, quiet and dedicated life as the crown of a good name.

The third part of symbols: Other transformation and creative visual development has nothing to do with Torah so much.

The fourth part of symbols: Contemporary. In the second half of the 19th century. They bear the sign of the coming out of the ghettos and links with other cultures. Note the more professional symbols.The snake of Aesculap. For doctors.
Scales for lawyers.
Frictional bowls for medics.
Compasses for builders.
Most common symbols on gravestones in the Karlovy Vary region are: blessing hands, a six-pointed star and the pot.

Hand symbol indicates that the deceased was kohen, a descendant of the first high priest Aaron. These people often used the surname Kohen, Kohn, Katz and Kahn. A blessing hand gesture illustrates the clerical blessing with outstretched fingers on both hands. The gesture is accompanied by the words: “May God bless you and protect you, may the Lord let his face shine upon you.” A composition of hands imitates the movement by which is given God’s blessing. The gesture represents the channel and connection.
A six-pointed star or a hexagram was originally an ancient magical sign called the Magen David which means Shield of David. This symbol appears frequently in Jewish symbolism with the pentagram (Solomon’s seal). Magen David became a part of the emblem of the Jewish community around 1530 and over the years has spread to other parts of the diaspora as a general symbol of Judaism.
Symbol of a teapot and bowl represents a Levite set and indicates the final resting place of Levites, a descendant of Levi. Levi was the third of twelve sons of Jacob. Only the Levites had the right to serve during worship to priests. One of these acts was also washing hands of Kohens before blessing. To do this, they used cans as containers for water and a bowl for washing their own hands. These two subjects, closely connected with their functions in a religious ceremony, became their symbols.